Sharing stuff I learned about React-Redux last year Sept - Nov as I helped write docs for it.

Last year between September and November, I've spent much of my time working on an open source project, React Redux, to help with rewriting the doc. We've written a completely new Basic Tutorial, a piece for mapState, mapDispatch, respectively. One of the maintainers wrote a Why React Redux that goes through its design intentions. He has also written a blog post about the history and the development of React Redux that so interesting that you absolutely have to read. And since v6 has landed in December, we've updated the docs around that as well. 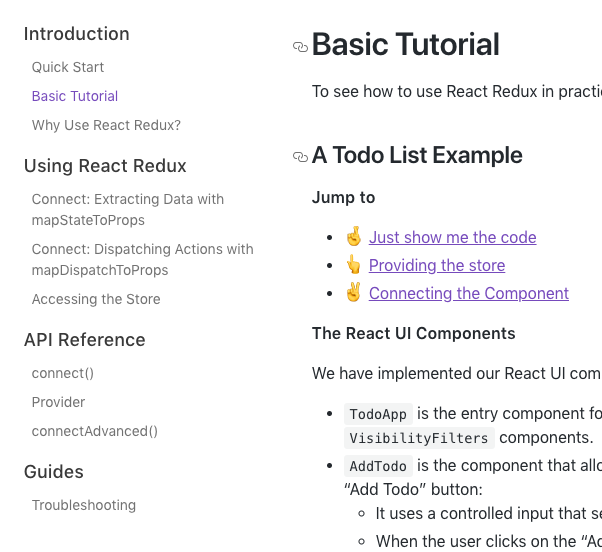 I am, however, by no means an expert in this topic. On the contrary, throughout this process I've really learned how little I know about react redux although both redux and react redux are relatively small libraries.

And by writing the doc I've also learned to appreciate some of the design and implementation of the APIs. They are really really interesting and I cannot help but wanting to share with everyone.

So this is what this talk is about.

Recall the store APIs here. Have you ever wondered about this question: How come we're using redux everyday, but we're not using any of those APIs? We'll talk about this later but I'd like to say here that React Redux is doing a lot of work here.

To use Redux with any UI, we need to:

Consider the naive implementation as follows:

Let's look at a connect.js explained by Dan Abramov.

This part of the talk roughly follows Connect: Extracting Data with mapStateToProps.

This part of the talk roughly follows Connect: Extracting Data with mapStateToProps

This part of the talk roughly follows Upgrading to React-Redux v6: Around the New Context API

Below are the links I mentioned that you may be interested in reading: